By serving as an educational and cultural resource, Chellis House aims to provide a forum for the advancement of women's and gender issues at Middlebury College.

a few words about may belle chellis 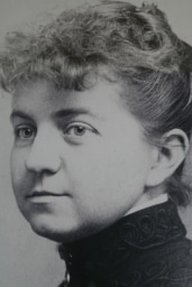 Everyone fears whether or not they will fit in or belong to a (new) community, whether that community is a big as the whole Middlebury Campus or as small as the Chellis House.

And for many men of trustees that attended the open house for the new Chellis House Women’s Center back in 1992, they definitely worried if they had a place in Chellis House.

In my interview with Jan Albers, the first Director of Chellis House, Albers said, “Some of the men looked extremely uncomfortable and were making jokes about whether they would 'get out alive!' It was a fun party, and none of them seemed to have suffered any ill effects from this frightening encounter with feminism at Middlebury.”

Through research and days at Special Collections in the Davis library and on my computer, I got to know May Belle Chellis a little bit better.

There were no dormitories for girls at Middlebury at the time. May Belle Chellis said, “It was great fun for us three girls of the freshman class to furnish a study room in the Old Chapel building. Our friends gave us twenty-five dollars, some chairs and a mirror.”

During her first two years she ranked second in her class and was able to take some third year courses. In her third year, she took the remaining courses plus her fourth year courses and was able to graduate after only three years and in that way, she became the first woman graduate of the College. She was also the valedictorian of her graduating class.

Upon graduation, Chellis taught at Black River Academy. She taught French, Greek and History. One of her student was former President Calvin Coolidge. He later wrote about Chellis in his autobiography. “During most of my course at Black River Academy George Sherman was the principal and Miss M. Bell Chellis... I owe much to their inspiration and scholarly direction. They gave me a vision of the world when it was young and showed me how it grew.”

After working at Black River Academy, Chellis went to teach and eventually became the principle of a high school in St. Peter, Minnesota. When she moved to Nebraska to come the principal of Gates Academy, she met her husband and married in August 1896. She and her husband, Joseph Doremus, had five children together.

May Belle Chellis died on November 30, 1937 and her contributions are kept with us.